Group     News     Emirates touches down in Auckland via Bali

Emirates touches down in Auckland via Bali

Emirates has launched a new daily service from Dubai to Auckland via Bali, reflecting increased interest in the attractive Indonesian island destination and improving connectivity to New Zealand.

Emirates’ new Dubai-Bali-Auckland flight provides the only year-round non-stop daily service between Auckland and Bali, giving passengers an opportunity to visit and/or stop over in one of the most popular islands in Indonesia. The new service will also be the first Emirates Bali flight to offer passengers the airline’s award-winning First Class product. 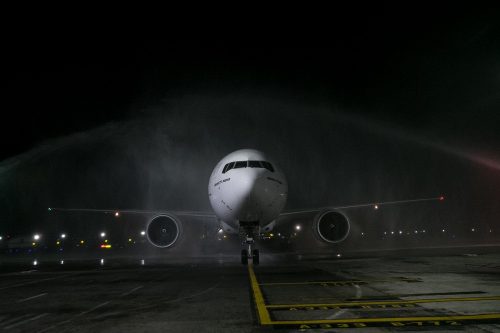 Inaugural of Emirates in Bali Airport[/caption]

Flight details and connections to Emirates’ global network and beyond.

Apart from the opportunity for a stopover in Bali, the new service will provide excellent connections to/from London and other major European cities. The southbound flight, EK 450, will depart Dubai at 07:05, arriving at Denpasar (Bali) at 20:20 local time, before flying on to Auckland at 22:00, arriving in New Zealand’s biggest city at 10:00, the following day.

Norwegian continues expansion in Ireland with first route to Canada